The South West Coastal 300 is a stunningly scenic 300 mile road trip around the South West of Scotland. If you are looking for breathtaking scenery, enchanting coastlines and new things to see and do, this is the road trip for you.

Whether you are a Nature Lover, an Adventure Seeker, if you’re into History and Heritage or Arts and Culture, if you’re looking for family fun or would like a Taste of the South West – I’m going to make some suggestions for things you might like to do when travelling the SWC 300 from Ayr to Dumfries……enjoy…

Head off from Ayr on the A77 South (signposted Stranraer)

The first village you will come to is Minishant – just after it turn left onto the B7045 and the next place you’ll come to is Kirkmichael – with the village of Straiton just 5 miles further on.

Straiton and Kirkmichael are both conservation villages on the South West Coastal 300.  Straiton with its wide village street and attractive stone built cottages is neatly placed 100 yards above a sweeping bend of the winding Water of Girvan. The village is on the edge of Galloway Forest Park – the largest forest in the UK and makes an excellent base for exploring the delights the park has to offer.

Straiton features in the 50 Most Beautiful Villages in Scotland book and was the main location of the film “The Match” due to its resemblance to a highland village. Nearby Blairquhan Castle also doubled as Balmoral Castle in the film “The Queen”. starring Helen Mirren.  In Straiton itself, St Cuthbert’s Church is well worth a visit. The church dates back to the 13th Century and has a particularly interesting graveyard with some unusual and beautifully carved headstones.

For walkers, there are 5 waymarked trails all starting from the village where there is an information board on the walks. Enjoy the waterfalls, river banks and quiet woods. Possibly the most spectacular walk takes you to the summit of Craigengower Hill (Hill of the Goats) and the impressive monument to Sir James Hunter Blair which dominates the view from the village. On a clear day you can see as far as Ben Lomond, Arran and Ailsa Craig.

Fishing permits for a 3 mile stretch of the river can be purchased (in the town) for a chance to catch trout, sea trout or salmon.

For cyclists, Straiton is within the Ayrshire Alps Cycling Park and there are also miles of forest track for mountain biking.

From Straiton head West to Dalmellington

As you enter Dalmellington, the sign says “A Village in the Stars”. Dalmellington is at the edge of Galloway Forest Park, famed for its dark skies. Just a few miles from the village you will find the Scottish Dark Sky Observatory – a great way to find out about the stars (booking strongly advised).

The view of Dalmellington from a distance is dominated by the high tower of The Kirk of the Covenant. The building dates back to 1846 and commemorated the Covenanters who lived and died there. The red door of the church symbolises the blood spilled. The Water of Muck flows through Dalmellington and joins the famous River Doon a few miles downstream.

Dalmellington makes a great base for exploring the stunning scenery of Galloway Forest Park. It is only a few miles from Dalmellington to Loch Doon – home to the spectacular ruins of Loch Doon Castle which is thought to have been built in the 1200’s by either King Robert the Bruce or his father. Have a speciality tea  or a light lunch at Dorinnes Tea Room, visit Just to Say Gifts and Flowers and also Elizabeth James Creations – just a few of the small businesses in Dalmellington.

Walking – There are many walks to be done in the stunning countryside surrounding Dalmellington including a circuit of Loch Doon for the really fit. A sign in the village centre displays options for several routes.

The Forestry Commission describe the Carrick Forest Drive as ” a taste of wilderness” and an easy way to discover remote and splendid mountain scenery. The drive is 6 miles on unsealed road from the southern tip of Loch Doon to Stinchar Bridge near Straiton. The road is suitable for most vehicles and is open from 7 May to October. There is a small toll fee.. There are picnic areas and a childrens adventure playground about half way along the drive at Loch Riecawr. Hillwalkers will enjoy Cornish Hill which can be climbed from Stinchar Bridge at the end of the drive. The walk takes about 2 hours and also passes the remote Cornish Loch.

If you would prefer to do some mountain biking there are mountain bike routes in Galloway Forest Park, between Barr in Ayrshire and Loch Doon – where the routes are at high level much of the way so they enjoy good views.  They start from the village of Barr in Ayrshire, and reach Dumfries and Galloway at Loch Doon. The hills tend to be steeper and longer at the east (Barr) end of the route.   There are four different circular possibilities, most of which use public roads to link up circular routes. These could be linked in a number of ways. The part between Loch Doon and Loch Braden is linear only.

On your travels around the Carrick Forest, you may see much wildlife including Black Grouse, Red Deer, Roe Deer, Buzzard, Golden Eagles and Peregrine Falcon.  If you’re driving – the Carrick Forest Drive may be incorporated into a circular route from Dalmellington to Straiton along the B741 which also forms part of the SWC300 then left at Straiton to head south on a minor road to Stinchar Bridge where you pick up the Forest Drive to Loch Doon then back to Dalmellington.  If you fancy a bite to eat – the Roundhouse Café at Loch Doon is open 7 days a week April to October and, weather permitting at weekends during the rest of the year.

On leaving Dalmellington head further west and through New Cumnock (where there’s an Open Air Swimming Pool), before turning onto the A76 (signposted Dumfries) passing through Kirkconnell, Kelloholm, Crawick and coming to Sanquhar.

Sanquhar was one of the first Royal Burghs in Scotland and the town also has the world’s oldest Post Office, opened in 1712 and still operational.  Sanquhar is on the River Nith – one of Scotland’s top salmon rivers and makes a great base for exploring Upper Nithsdale and beyond. When you think about Scotland’s highest places, most wouldn’t consider the south of Scotland but Sanquhar is less than 10 miles away from the two highest villages in Scotland – Wanlockhead and Leadhills where you can immerse yourself in the rich mining history of gold and lead and visit the Lead Mining Museum.

Also nearby to Sanquhar is Crawick Multiverse – a landscape art project designed by Charles Jencks It’s an amazing land art installation for you to explore and enjoy.  Whether you are interested in cosmology, science, art or just want to wander around and savour the beautiful landscape you will be warmly welcomed.

Continue South on the A76 til just after Mennock where you’ll turn left onto the B707 – heading to Wanlockhead. 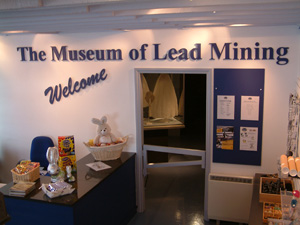 The Museum of Lead Mining in Wanlockhead tells the story of the local industry and allows the opportunity to go down a former working mine. The Miners’ Library, founded in the 18th century, houses detailed records of mining operations and carries a fascinating photographic collection.  Food is available at the tearoom.   At the Straitsteps Cottages you can experience what life was like for a miner in the 18th and 19th centuries. The artefacts on show illustrate how the people of Wanlockhead lived and worked.

The Leadhills and Wanlockhead Light Railway is Britain’s highest adhesion railway, reaching 1498 feet above sea level. It was built to take refined lead to Scotland’s central belt, but closed in 1938. Now a length of gauge track has been re-opened between Wanlockhead and Leadhills, with trips available at weekends during the summer. 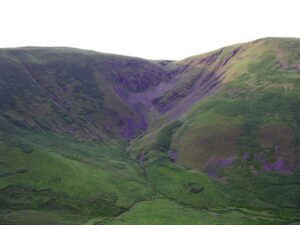 Moffat lies just beneath the striking natural grandeur of the Devil’s Beef Tub (The Devil’s Beef Tub is a deep, dramatic hollow in the hills north of the Scottish town of Moffat. The 500-foot (150 m) deep hollow is formed by four hills, Great Hill, Peat Knowe, Annanhead Hill and Ericstane Hill – and it’s worth seeing). 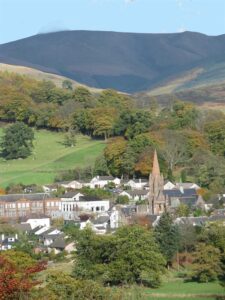 In local historian Emillio Dicerbo’s fantastic book “Memories of Moffat” we read “In the seventeenth century, Moffat’s transformation from a poor ‘Brigadoon’ – like village to the beginning of a popular Spa town occurred”.  The sulphurous waters of Moffat Spa were believed to have healing properties and as more and more people flocked to Moffat, the “healing waters” were piped from the well to the “Baths Hall”  (now the Town Hall). The town began to grow and more accommodation was required to cater for the thousands of annual visitors.

The hills above Moffat are one of the two main sources of the River Annan and the town is also the home of the world famous Moffat Toffee.

If walking is your thing….this is the perfect place for walkers. On the scenic Southern Upland Way and the most northerly point on the Annandale Way, you’ll find Moffat offers a stunning landscape for your walking holiday and a warm and friendly place to rest awhile. The town is also a perfect base for visiting the Grey Mare’s Tail – a spectacular 60 metre waterfall which flows from Loch Skeen. The walk to Loch Skeen via the Grey Mares Tail  has been listed as one of the UKs finest half day walks and you also have the possibility of seeing a herd of mountain goats. The walk to Loch Skeen takes about 2 – 2.5 hours.  For the more adventurous walker, one of Scotland`s Corbetts, White Coomb can be climbed from Loch Skeen while two other Corbetts, Hart Fell and Broad Law are nearby.

If you fancy staying over or stopping for a lovely lunch or dinner  – check out the Black Bull Inn in Moffat – a luxurious 15 bedroom boutique hotel, bar and restaurant.  Dating back to 1568, the ancient Inn was famously frequented by The Bard, Robert Burns, who enjoyed many a raucous party in the establishment – a history which remains intertwined into the very fabric of the hotel to this day. As well as being rich in Burnsian history, the Inn also has a macabre past as it was commandeered by The Earl Of Dundee and his company of Dragoons as the headquarters from which they carried out their relentless persecution of Scottish Presbyterians.  Today The Black Bull Inn is family owned and has been transformed into a calm, tranquil, quirky hotel with cosy bar and intimate bistro.

After leaving Moffat – you can head on  the A701 South – before taking the B7076 just after Beattock.  Continue on the B7076 until you reach Lockerbie – then take the A709 towards Lochmaben. 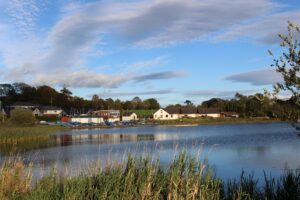 Lochmaben is a small town that boasts three lochs and is 8 miles from Dumfries. The lochs in and around Lochmaben – Kirk Loch, Castle Loch and Mill Loch – provide excellent opportunities for sailing and fishing. Lochmaben is also on the route of the Annandale Way long-distance walking trail. The town isn’t far from the popular 7stanes mountain biking centres at Ae forest and Mabie forest if you fancy some cycling.  Lochmaben has a long and intriguing history that dates back to the 13th century. Lochmaben Castle was the home of Robert the Bruce when he was Lord of Annandale and a statue of Bruce stands before the town hall. Lochmaben was also the birthplace of William Paterson, the co-founder of the Bank of England.

From Lochmaben continue along the A709 – which takes you back to your start point in Dumfries…..

I hope my Blog has given you some insight into the beautiful South West Coast of Scotland – and let you plan a future  trip here around the South West Coastal 300 route……….enjoy…..